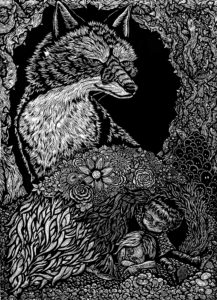 After receiving her MFA in Print Media from Cranbrook Academy of Art in 2007, Jun moved to Virginia and hasbeen working as an artist and teacher. She was previously the assistant director at Stone Branch School of Art in Rockville, MD.

As a printmaker, Jun has a strong background in relief printmaking and screenprinting. During her residency at Lee Arts Center, she has focused on large-scale woodcuts and screenprinting. The large woodcut is 3ft by 4ft and one block takes approximately 4-5months to complete.

Jun has offered printmaking workshops and classes during her residency and continues to do so. She has been teaching screenprinting and relief printmaking to different age groups and skill levels and strongly believes that we can bring more public interest to the Center with art classes and events.

What drew Jun into printmaking is the “down time” involved with the process. In printmaking, one can’t be rushed or force the realization of a print through shortcuts. During those intermissions in between the physical art making, she learned more about the direction of her work as well as what it is to be an artist. The processes, and the reflections that are part of the process, are what made her who she is as an artist today. http://www.junleeprints.com/ 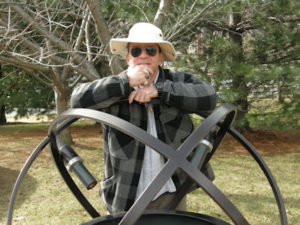 Alfredo Ratinoff was born in Buenos Aires, Argentina, where he trained in ceramics with his master Teodolina Garcia Cabo starting at the age of eleven. He studied at the National School of Ceramics and also studied drawing and painting at the National Art Academy.

Mr. Ratinoff specializes in large scale installations of tile and mosaic murals and his works are in many private collections all over the United States, and have been exhibited at the Museum of the Americas at the OAS, The N.A.S.A Headquarters in Washington D.C, The AT&T Headquarters in Oakton ,VA, Barnes & Noble Corporation in Rockville, MD and New York, N.Y, Strathmore Hall Art Center, Bethesda, MD, and his work is in the permanent collection at the Embassy of Argentina.

In 2004, he created a stained glass piece for the mausoleum of the renowned Cuban singer Celia Cruz in Bronx, N.Y  Most recently, he was selected to be the artist in residence for the AARP Foundation during the 2007 Women’s Vision Summit in Tucson, AZ where he created one-of-a-kind pieces that were presented to corporate donors.

Mr. Ratinoff is currently a faculty member for the ceramics department at the Resident Associates Program at The Smithsonian Institution in Washington, DC. He was selected by the Embassy of Italy to work in the 2004 summer program at Georgetown University teaching mosaic workshops sponsored by a grant from the National Endowment of Humanities in Washington D.C.
In 2007 he was invited by the Center for Renaissance and Baroque Studies at the University of Maryland as a faculty member to teach ceramics at the Multi-Disciplinary Summer Institute for Maryland School Teachers. In 2008, as the current artist-in-residence for Lee Arts Center in Arlington, Virginia, he designed mosaic columns for the center’s Butterfly Garden for Arlington County residents. During fall 2008, he completed his installation of “Zodiac Art” at the mansion at Strathmore Music Center. He serves also as a curator for the art committee at the Inter-American Development Bank in Washington D.C. This year, Mr. Ratinoff was invited as a visiting artist by Bonnie Fitzgerald, President of Maverick Mosaics in Vienna, VA, to teach two mosaic workshops in her studio. Currently he resides in Hyattsville, MD where he also has his private studio.  http://www.alfredoratinoff.com/ 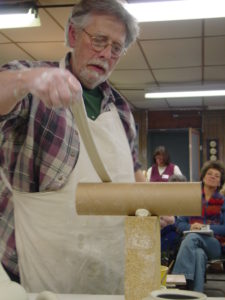 For many years Malcolm was a resident- and visiting-artist here at the Lee Arts Center. We will miss his gregarious ways, his humor, his bent for storytelling and his beautiful pottery.

Malcolm Davis had been a full-time studio potter since 1984 when he left his previous life as campus minister. He took his first ceramics class in 1974 and since 1985 has maintained his mountaintop studio in Upshur County, WV. He was internationally recognized for his work with shino-type glazes, specifically for the creation of a unique ultra Carbontrap shino-type formula with a high concentration of soluble soda ash, which encourages the trapping of carbon in the early stages of the firing.

He was the recipient of numerous awards, including four grants from the District of Columbia Commission on the Arts and Humanities, and was a finalist in the 1995 Mid Atlantic Arts Foundation/NEA Visual Artists Fellowships. Other awards include the Purchase Award at the Ceramics Monthly International Competition (1999), First Place in the 1996 Strictly Functional Pottery Show, Feats of Clay XIII and XIV Merit Awards, Orton Purchase Awards in 1994 and 1996, Crosscurrents All Media Award at the Stifel Fine Arts in Wheeling (1990. 1996), WV Juried Exhibition Merit Award in 1996, and Awards for Clay Cup VII and Clay Cup IV.

He has exhibited at the Philadelphia Museum of Art Craft Show, the Smithsonian Craft Show and the American Craft Council Craft Shows. He has been an artist-in-residence at Artpark in Lewiston, NY; Baltimore Clayworks; Greenwich House Pottery (NYC); The Clay Studio in Philadelphia; Red Star Studios in Kansas City; Northern Clay Center in Minneapolis; Waubonsee Community College in Illinois and the Lee Arts Center in Virginia.