The performing arts is one of the best connectors for people and communities. In Arlington, signature festivals like the Rosslyn Jazz Festival draw over 10,000 people from all around the Metro DC area, while festivals like the Columbia Pike Blues Festival celebrates the vibrant culture of one of our most diverse neighborhoods.

A live broadcast on WERA 96.7 FM brings the soul of the Columbia Pike Backyard Blues Fest right into your home, car, or yard! Don’t miss this virtual alternative to the annual festival on Saturday, June 20 from 5-7pm! Learn more.

Groovin’ on the Pike 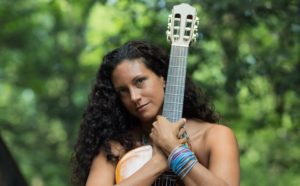 Arlington Arts has partnered with Columbia Pike Branch Library to present our new music program First Fridays: Groovin’ on the Pike. Featuring a diverse line up of musical groups from near and far, guests can dance in the stacks and drink beer provided by New District Brewing every first Friday of the month! See past shows here.

In partnership with the Rosslyn Business Improvement District, the Rosslyn Jazz Fest has taken over all of the three-acre, urban Gateway Park for that past 27 years. This much-anticipated annual event draws upwards of 5,000 music fans to Gateway Park for a day of dynamic, free performances.

Put your records on for a sizzling tribute to the golden age of the turntable featuring the hits ...

Gallery Underground in January presents, in our Focus Gallery, “New Beginnings,” an a...

Forty+ Projects celebrate the collective creativity of people past the age of 40 resulting in uni...

Signature’s Master Electrician Dan Kimble shines a spotlight on all things lighting. This i...

Get ready to sweat! Groove to the moves of artists such as Beyoncé as Dance Educator Dani ...

Virtual Masterclass: The World of Wigs