The visual arts in Arlington can be found everywhere in the community: from exhibitions on the Arlington ART Bus, to projections on building facades. Even residents create their own works like during our How to Video Festival. Learn more about our programs and how you can get involved. 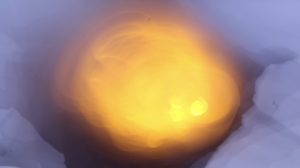 Arlington artists Emma Cregan and Johab Silva were selected to be showcased in the Arlington Open Call 2019 Exhibition, which opened Friday, September 6 (reception: 6:00 till 8:00 pm) through Saturday, November 2, 2019 at Cody Gallery at Marymount University.

The work of Cregan and Silva intersect at various points visually and conceptually. Emma Cregan’s stop motion videos “Escaping Blade”, “Escaping Soil” and “Escaping Surface” are experimentations of long shutter speeds. The images are captured fragments re-interpreted with the use of light, allowing our perception of the environment and reality to become abstracted. Johab Silva’s paintings on panel are inspired from his travels to the Amazon rainforest and the impact of human presence and the environment. The artist will also create a site specific installation in the University stairwell with lightweight plastic materials. Together, the work of these artists allow us to slow down and re-interpret the environment around us. Click here for more details!

Art on the ART Bus

Art on the ART Bus is a mobile gallery on one of Arlington County’s ART buses. Run by Arlington’s Special Projects Curator, Cynthia Connolly, this unique bus features original works of art. This dynamic connection between public transit and original art makes the commute as exciting as the destination, cultivating a vibrant arts experience for transit in Arlington County, Virginia. Initiated in December 2010, this bus rotates throughout the different routes available to ART bus passengers. Learn more about the program and view past exhibits.

Courthouse 2.0: Reimagining the Civic is a public art initiative aimed at sparking public conversation about the future Courthouse Square by exploring the interaction between civic space and civic life in Arlington in the twenty-first century.  We see Courthouse as the symbolic heart of Arlington, a public ‘town square’ where all Arlingtonians can gather to create, celebrate, or to simply relax. Courthouse 2.0: Reimagining the Civic encompasses a variety of projects including temporary/semi-permanent public art, performances, lectures, exhibitions and pop-up activations.  Learn more about these past and upcoming projects!

Arlington boasts an award-winning Public Art collection with over sixty permanent public art projects commissioned by the County, developers, and initiated by individual communities since 1979.  We have hosted more than 40 temporary public art projects and are monitoring about 25 developer projects at any given time. Our projects have received numerous awards, including seven Americans for the Arts Public Art Year in Review Awards .Learn more about the permanent collection, self- guided tours, the Public Art Master Plan, and resources for developers here. 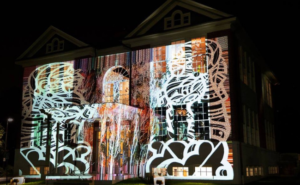 The event will feature a spectacular, artist-designed projection on AAC’s facade, further exploring the Día de los Muertos theme in visual form. This projection is a collaboration between MasPaz and Bell Visuals. MasPaz is a Latino artist born in Bogota, Columbia; raised in Washington, DC; and currently living in Arlington, VA. His murals and public art projects combine influences from Latin American culture with the aesthetic of contemporary street art. Robin Bell, founder of Bell Visuals, is a multimedia artist based in Washington, DC, whose video collage work combines creativity and political activism. 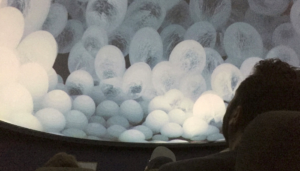 “…the full-dome projection series [is] one of the best and most innovative projects in the region.” (City Paper, “Best in Galleries, 2017”). In partnership with Arlington Arts, the Friends of Arlington’s David M. Brown Planetarium presents all four abstract animation works commissioned for the planetarium dome. Created by prominent visual artists from the region, were premiered in the planetarium over a period of two years. The works are: “In This Convex Hull” by Brandon Morse (pictured); “In the Midst of the Inferno” by Jonathan Monaghan; “Nova” by Shannon Collis; and  “Babel” by Kelley Bell. Program duration: aprox 45 minutes.

See past screenings including Shannon Collis, “Nova” and Brandon Morse’s In This Convex Hull”

How To Video Festival

The  “How To” Video Festival features screenings of instructional videos that are informative and entertaining created by residents of Virginia, Maryland, and Washington, DC. Prizes include: $250 Best Video Prize provided by the Friends of the Arlington Library, as well as an award for the Best “How To Library” video. There’s also a $250 People’s Choice award given to the video the audience votes for the most provided by LMO.